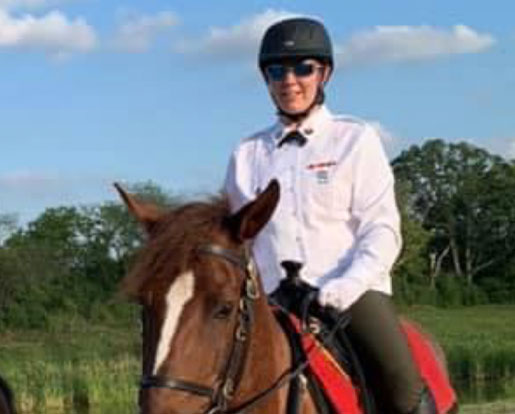 Jen is a 91-W series Army combat medic veteran who served as both medic and military spouse from 2003 to 2015. Jen’s experience with the military is one of loss, addiction, raising babies alone in foreign countries, suffocating guilt, and PTSD.

The war claimed countless battle buddies, the hearts and minds of many she loved, and eventually her marriage. Jen’s boots never touched the sand; she remained behind, tasked with raising babies and battling daily between parenthood and the call of the wounded. She fought an invisible war back home, mercilessly trying to heal her broken husband after two tours ravaged his soul and ability to stay sober.

After ten long years of withstanding every abuse imaginable, Jen finally left her marriage. It wasn’t until she met her famous bearded man, a carpenter with unlimited patience and devotion, that she made time for herself. It was the handsome bearded man who encouraged Jen to attend Operation Wild Horse camp for the first time.

Rooster, Jen’s favorite OWH horse, has his own anxiety and when Jen rides, her mind clears as her healing skills are finally put to use. Her favorite feeling is when a ride with Roo starts off a little feisty, but ends with him calmly relaxing under the saddle. Rooster is every soldier Jen couldn’t heal, and by letting her help, Rooster’s also healed Jen.